No matter your sport or athletic discipline, if you’re training at high intensities for extended periods of time, you know the feeling of lactic acid buildup. It isn’t fun and it quickly slows you down. The familiar “burn” is actually caused by hydrogen ions, which are generated in large quantities whenever lactic acid accumulates. The muscle naturally buffers these ions with carnosine (beta-alanyl-L-histidine). The carnosine precursor beta alanine significantly increases muscular buffering capacity, enabling you to sustain intense efforts and train more effectively. Klean SR Beta-Alanine delays fatigue, supports muscle endurance, and supports exercise capacity during short periods of intense effort. The ingredient SR Carnosyn® is a clinically researched, sustained-release formula that simplifies daily dosing and enables better muscle retention, with fewer side effects and simpler dosing than standard beta-alanine. Train harder, stronger and more effectively with Klean SR Beta-Alanine today!

As a dietary supplement, take 2 tablets, twice daily or as directed by a trainer, coach, or health professional.

If you are pregnant, nursing, have any health condition or taking any medication, consult your health professional before using this product.

Keep out of the reach of children. Store in a cool, dry place. Use only if safety seal is intact. 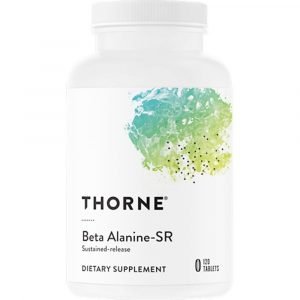 Be the first to review “Klean SR Beta-Alanine” Cancel reply